As of the 70th ordinary general meeting of shareholders held on June 10, 2015, Yorozu has switched from a company with a board of corporate auditors to a company with an audit and supervisory committee, in which outside directors make up the majority. This change was made with the intention of strengthening corporate governance. It enhances the audit and supervisory functions and increases the transparency and impartiality of management decision-making while speeding decision-making up.

Board of Directors
The Board of Directors comprises directors who are and who are not members of the Audit and Supervisory Committee. The Board convenes for regular meetings at least once every three months and also holds extraordinary meetings as necessary. It makes decisions on basic management policy, matters prescribed by law, and other important matters related to business management. It is positioned as a body that monitors directors’ and executive officers’ execution of business.
Management Committee (old Executive Committee)
We adopted an executive officer system in June 2001, in order to clarify responsibility and authority in the execution of management. We have put in place a system that can cope with sudden changes in the business climate through the holding of monthly meetings of the Management Committee, which is attended by directors, executive officers, and site general managers of group companies.
Audit and Supervisory Committee
We have enhanced the audit and supervisory functions by establishing an Audit and Supervisory Committee, in which outside directors make up the majority, and designed to strengthen corporate governance. The Audit and Supervisory Committee audits whether or not directors’ execution of duties is implemented in conformity with the law, articles of incorporation, and other rules, as well as its rationality and accordance with management policies. The Committee also decides the content of agenda items related to the appointment and dismissal of accounting auditors and arrives at an opinion on matters such as the appointment, dismissal, and remuneration of directors who are not members of the Audit and Supervisory Committee.
Outside directors
Yorozu appointed four outside directors, on the basis of the aim of the Corporate Governance Code, in order to contribute to the company’s sustainable growth and enhancement of its medium-to-long-term corporate value. The outside directors give advice on directors’ execution of duties from an objective and neutral standpoint. They are appointed with the goal of strengthening the audit and supervisory functions.

Global matrix for each function
We have put in place a system whereby the persons in the head office responsible for various functions (i.e. safety and production, production technology, business strategy, personnel planning, financial affairs, quality, development, sales, and procurement and production management) control the overall group on a function-by-function basis. On the vertical axis, site general managers of group companies gather the facts and figures and make prompt business decisions based on that information. By itself, however, such a system could prove suboptimal. Accordingly, on the horizontal axis, persons in the head office responsible for different functions ensure standardization and overall optimization by managing each function across all sites on a global basis.
Additionally, in order to strengthen our global communication capability, we make use of a 3D matrix for each function that extends down to the level of office organization and the persons responsible for specific tasks.
The Internal Auditing and Environmental Management Office
With the Companies Act having taken effect in May 2006, we established the Internal Audit Department（Currently The Internal Auditing and Environmental Management Office） to strengthen internal controls. The department conducts audits of the company, subsidiaries, and sub-subsidiaries. The results of audits are reported directly to the chairman and president. If any problems are identified, the relevant departments are required to make improvements as needed and the status of improvements is followed.
The department also monitors internal controls in an effort to ensure the appropriateness and efficiency of business operations. Furthermore, to ensure the reliability of financial reporting based on the Financial Instruments and Exchange Act, the department develops and applies internal controls related to financial reporting that comply with the generally accepted standards for the evaluation of internal controls related to financial reporting.

Other
In March 2005, we established the CSR Promotion Committee, which is made up of four working groups on corporate governance, risk management, compliance, and the environment. In June 2008, we established the CSR Promotion Department (which was integrated into the Internal Audit Department in an organization revision) as the successor to the CSR Promotion Committee. Since April 2014, the General Affairs Department has been providing cross-sectoral guidance and supervision regarding risk management and compliance while the Internal Auditing and Environmental Management Office has been acting similarly regarding the environment. 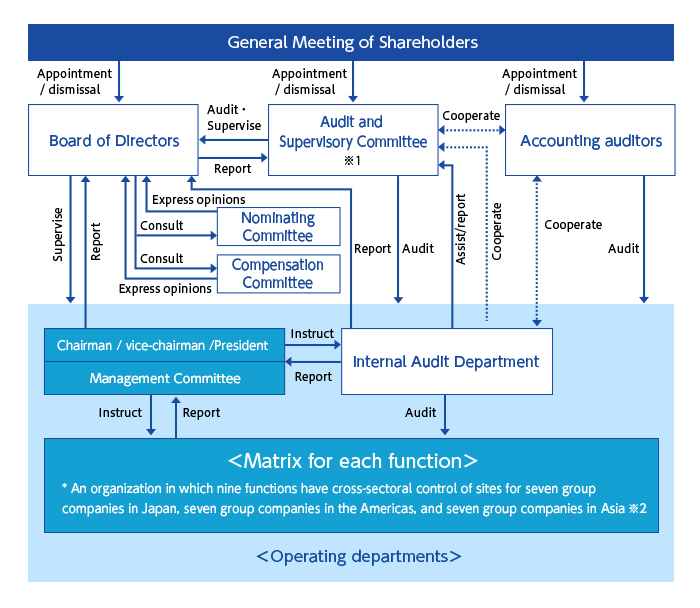 ※1 Adopted the form of a Company with an Audit & Supervisory Committee in June 2015.